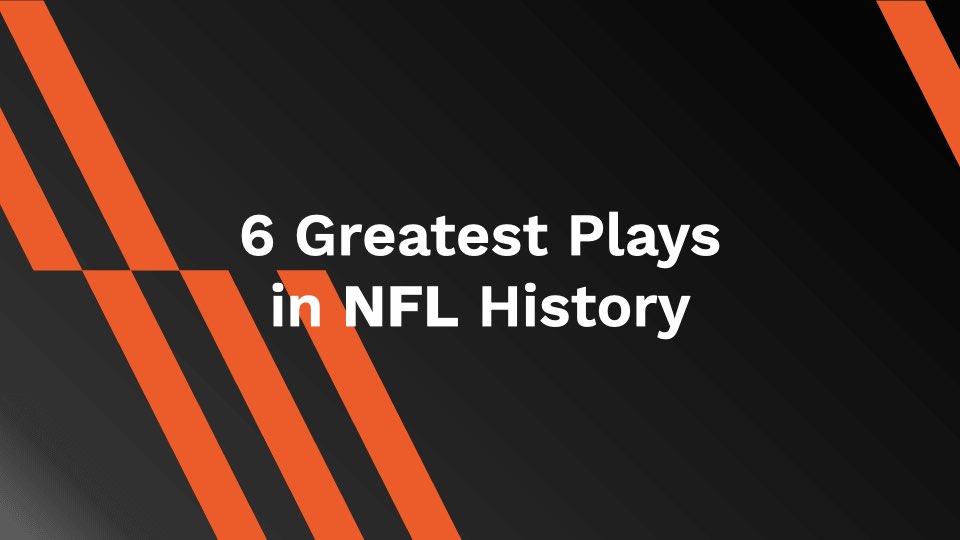 Ever wonder what the greatest plays in NFL History are? For those of you who are new to this sport,  The National Football League (NFL) is an American football league, is one of the four major North American professional sports leagues. It consists of 32 that are divided equally between the National Football Conference (NFC) and the American Football Conference (AFC). It is also the highest and professional level of American football in the world. The NFL’s 18-week regular season runs from September to January, with each team playing 17 games and having one bye week.

The NFL was first formed in 1920 as the American Professional Football Association (APFA) before changing it to the 1922 season. Throughout the years, there are several great moments in NFL history that are extremely astonishing, and you could never miss. You can watch them on NFL official website, nfl.com, as it is the most significant source of news, updates, and video for NFL matches. We have gathered some greatest plays in NFL history for you.

Nobody likes butt jokes. In front of the home crowd of 79000 fans, Sanchez collided with the butt of his teammate Patriots that caused a fumble. The play was the focal point of a disastrous sequence, where the Jets lost the fumbles, and the Patriots scored three touchdowns.

Roger Craig Runs Over With High Knees for a Touchdown

Roger Craig showed the importance of high-knee drills and went to four Pro Bowls and won three Super Bowls with the 49ers. Craig was the first NFL player to have 1000 yards rushing, making this one of the greatest plays in NFL.

This is another greatest plays in NFL history. It was winning 17-0 on a windy and snowy January afternoon at Soldier Field in Chicago. The Rams faced a 3rd and 11 in Bears’ territory; Chicago’s Richard Dent sacked Rams QB Dieter Brock, causing a fumble.

Wilson had 52 interceptions over 13 seasons with the Cardinals. This one-handed pick against the Eagles turned 91 yards for a touchdown, which was the best of all of his Hall of Fame career.

The Arizona Cardinals are on the wrong side of history. This one is also the greatest play in NFL history in which Carson Palmer passes and Larry Fitzgerald git a catch with both running and scoring. They got to go home happy.

Hugh McElhenny Runs For about 77 Yards Reception Without a Helmet

The NFL used to be the most challenging game back then because players wore helmets without face masks. Sometimes, they didn’t wear helmets at all, which is quite dangerous for them.

Download Videos of Greatest Plays in NFL videos with AhaSave

Want to save and rewatch some of the greatest plays in NFL history? Let’s use AhaSave free video downloader to the browser and download the video. AhaSave is a free video downloader for Android; having a private browser helps you download NFL videos for free. It will auto-detect videos on the website, which you can download with one click. It also supports many major social media platforms and HD video downloads.

Easy to download: AhaSave downloader is easily installed on Google Play or by APK files.

Download by Copy and paste: You can download NFL videos by just copying and pasting the link. AhaSave downloader will auto-detect the connection and download the video.

Easy to use: It is compatible with over 50+ websites because it is easy to use and fastly downloads videos.

Private video folder: You can also lock confidential videos in a personal browser with a passcode, which is only accessible by you.

How To Download Greatest Plays in NFL with AhaSave Downloader?

Step-1: Open the site with the AhaSave built-in browser and browse the video you want to download

Step-2: Play the video that you want to download

AhaSave will automatically download the video and save it to local.