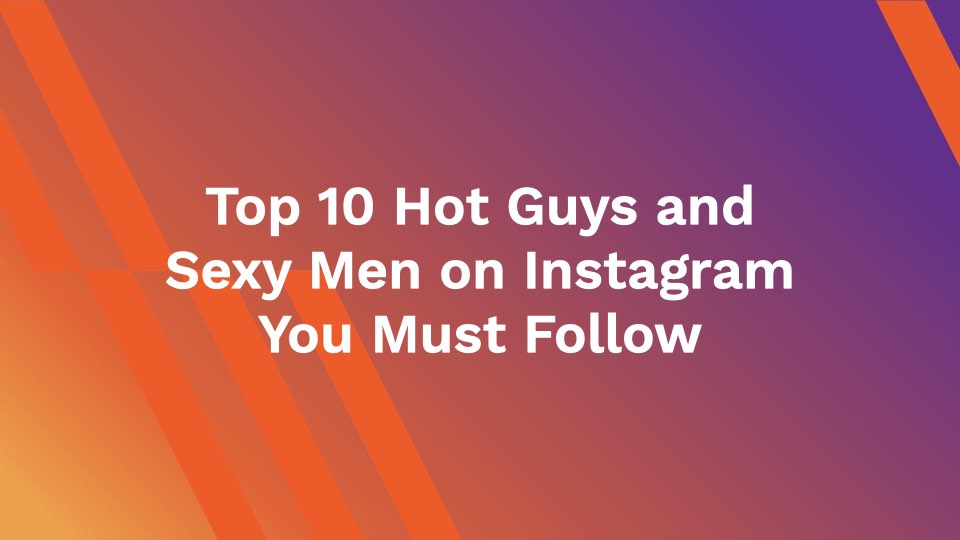 Have you ever wondered who are the hot guys and sexy men on Instagram? There are several sexy men present who showcase their beauty and become the most attractive men around the world. Most male models showcase their six-packs and muscles; others show their personality and creative style in their feed to create their portfolio, which will help them out in their modeling career.

Instagram is an essential tool that can also help you build your career in modeling by showcasing your personality and body in your feed. Your feed will become your portfolio which will help you make connections, find work and build a career. It has become so crucial for the people who want to become models to set up their Instagram account because top modeling agencies now require hot male models to be top rated on social media.

Nick is born in Burlington, Ontario, Canada, and began his Karate career at the age of 4 because he was crazed to become a Ninja Turtle. Then he chose to stop pursuing his dream and start his debut in acting. He became famous when he got selected opposite Rutger Hauer and Gregory Smith in Hobo.

Jordan is an American actor and was born on February 9th, 1987. He is a very famous actor for doing several notable roles in films. He went to Newark Arts High School to fulfill his dream of acting into reality. He can surely top any list of hot guys on Instagram.

Garafola is an Instagram star and model who became famous on social media in December 2014. He gave a photoshoot to her down syndrome sister and posted her pictures on Instagram. He’s sweet for being such a lovely brother to his sister, making him hotter than ever.

He spoke about in a few distinct markets of New York, Los Angeles, Milan, etc., and became a sight to behold, securing a place in the hot guy’s list on Instagram.

Sean is a local American model who worked with renowned brands like Calvin Klein, Armani, and other famous brands. He was also featured in Tylor Swift’s music video for “Blank Space.”

A French male model has walked for top creators like Emporio Armani, Etro, and Ermanno Scervino. He also worked in advertisements for H&M, Macy’s, and Tommy Hilfiger. Definitely one of the hottest guys you much follow.

Kortajarena is one of the best models on the planet from Spain and has walked the runway for brands like Bottega Veneta. He has also played a vital role in the acclaimed film 2009 “A Single Man.”

He is a Spanish model who has been on a list of hot guys on models.com’s rundown of the top 50 male models. He has also advertised for Calvin Klein and Versace. Viiperi was introduced to the modeling world by his mother and made him discontinuing his schooling to keep his career focused on modeling.

Andre is a positive speaker who turned into the model of online boutique Haze and Glory. He has also done modeling for GQ, Men’s Health, and other magazines. He initially started in 2010 and became an Instagram sensation.

Gandy is an English model, writer and has blazed a trail in the male modeling industry since he started modeling at 21. He became a part of the modeling world when he won the famous show “This Morning” and made his mark on the hot guy’s list on Instagram.

Step – 3: The link you have copied from Instagram will be detected and automatically downloaded by AhaSave.

Before you download any content from social networking sites, it is essential to understand that the contents’ ownership and intellectual property rights belong to their owners only. We recommend you obtain permission before downloading the content. You shall also indicate the sources of content and use the content for your personal use only.