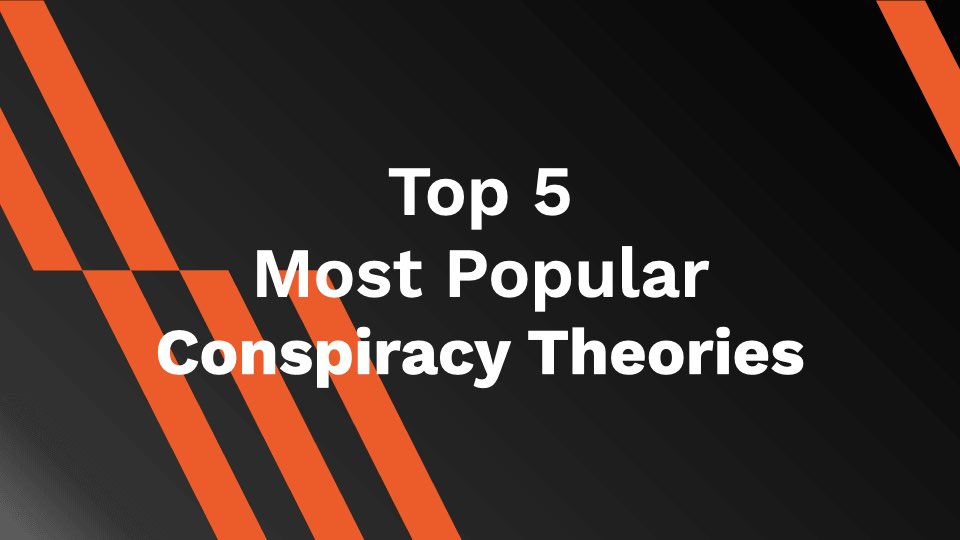 Less educated people play a vital role in the general conspiracy theories. The conspiracy theorist has no evidence that either of these claims is true. There are many major world events, almost certainly at least one conspiracy theory to explain it. The list is practically endless: 9/11 inside job, subliminal advertisements, and Princess Diana’s murder. The list doesn’t end here; many such theories are used in their conversational sense rather than rigorous evidence. That’s why these be called conspiracy theories.

We have listed below 5 top conspiracy theories of all the time.

Area 51 has more conspiracy theories than any other military facilities because the base is known as one of the most secretive military sites in the world. The reason is, it does not exist on any map or government website. Area 51 is a famous US Air Force Military installation located at Groom Lake in southern Nevada, which is not accessible to the public and under 24 hours surveillance. Area 51 employees use an aeroplane to reach the facility. They fly in and out of the restricted terminal at McCarran International Airport.

People believe that Area 51 is researching Aliens life and their spacecraft. However, most people think that they are studying a crash that happened near Rosewell, Mexico, in 1947. But the government has said the facility is used to test experimental aircraft for the military.

QAnon is the short term for a set of internet conspiracy theories. QAnon is a loosely organised network and community of believers who support a range of unconfirmed beliefs.

For example, QAnon claims that President Donald Trump secretly fights a “deep state” cabal of satanic paedophiles and cannibals. QAnon started as an online niche group, and it has now turn into a mainstream belief system for some conservatives. However, the claims within the conspiracy theories are not supported by any proof.

People can find the High-Frequency Active Auroral Research Program on Alaska mountains that helps the scientist study the atmosphere’s farthest distances. Its facility sits on 33 acres of land and has over 180 antennas, which have collected data about the aurora borealis, radio waves and other atmosphere occurrences.

People spread a conspiracy theory that antennas are an experimental weapon that can control people minds. Others believe that it caused the Columbia space shuttle to destruct in 2003. However, in 2016 the facility held an open house so the public could see that they were not doing anything dangerous.

In Dallas, Texas, Kennedy was in the motorcade on November 22, 1963, when two bullets shot him. Lee Harvey Oswald was arrested for the murder of the president, and after two days, he was also killed on live television. The Warren Commission was then created to investigate the incident and prove that Lee Oswald acted alone.

However, people believe that there is more to the story and spread the theories that the CIA hired Oswald because of the Presidents reactions to Communism and the Bay of Pigs Invasion. At the same time, others believe that Mafia, Cuba and others were involved in the assassination. However, when the videos of the commission released, people claimed Osawald’s location made it impossible for him to kill the president.

Yellowstone National park is about 3500 miles long, full of wild animals and gorgeous landscapes. But people said that there is something far more sinister under the park. An active Volcano measures around 44 miles across, and it erupts; it will wipe out the entire US.

The volcano last erupted about 630000 years ago, but there is some conspiracy theory that the next eruption could happen soon. Some believers say that the US is drawing possibility plans because the government knows that eruption is approaching. However, conspirists also point out videos in which animals are running away from Yellowstone, which people think is a sign of the explosion. On which experts said that animals are just running, there is no indication of anything.

Everyone uses the internet to download content for their use, but it is important to understand the critical feature in our mind; respect for intellectual property rights. Any information video, article, pictures or information that you want to download from the internet should be used for your personal uses only. This content should not be violated in any other way.