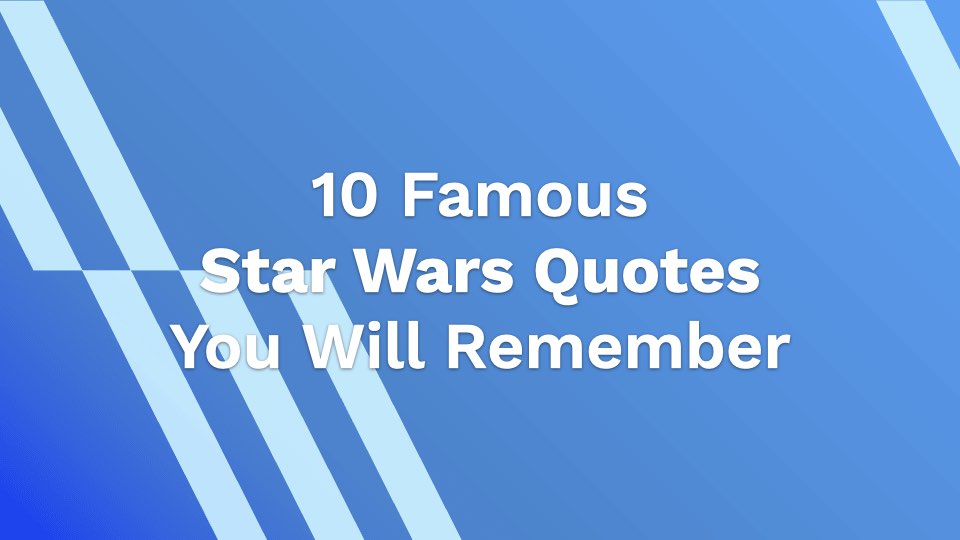 Looking for famous Star Wars quotes? 40 years after Star Wars first inspired a generation full of moviegoers, the world that George Lucas imagined is more pertinent than ever. The story in this sci-fi on a hero’s tragic failure and final redemption brings forth the story of victory over evil which has become common in our culture.

It is quite hard to find someone who has never watched a Star Wars Film or, better still, difficult to find someone who has not experienced the film through various quotes and even merchandise containing images from the film. It goes far to show how much Star Wars was a blockbuster. Almost five decades later, after this amazing film hit our screens, we are here to review some of the most enduring and iconic Star Wars quotes.

Help me, Obi-Wan Kenobi, you are my Only Hope.

George Lucas and Carrie Fisher commemorated Princess Leia’s character with this great line that many people, including Fisher herself, have quoted; she did a parody of this quote in her appearance as a nominated guest in the 30 rock sitcom.

“I find your lack of faith disturbing,” Darth Vader

In this scene, Darth Vader found it disturbing that Admiral Motti did not believe in the power of the Force. This quote means that if you have decided to join an empire, do not question the religion of a person who can kill you through their mind.

The Force will be with you always.

These are the final words said to Luke by Ben before Valder cut him down. The Star Wars quote is used to wish individuals well or good luck.

Never tell me the odds.

It is a memorable statement made by Hans Solo to reply to C-3PO, who was telling Hans how to navigate the asteroid field successfully. It simply means “do not jinx it.”

Yoda speaks directly to your soul. It is quite difficult to imitate his role Frank OZ agreed to this by stating that performing the role of Yoda is a tremendous responsibility. This quote speaks for itself, just as spoken by Yoda himself.

No. I’m your Father.

After watching The Empire Strikes Back, this statement was Star Wars quote is engrained in our minds, and we all could not stop using it.

Now, Young Skywalker, you will die.

Ian McDiarmid played the role of Palpatine in the 6 Star Wars films. His stern and angry look as he told Luke Skywalker this statement makes the quote even more memorable.

Just for once, let me look on you with my own eyes.

When Darth Vader tells Luke this statement, he simply means he wants a final look at his face directly without the helmet.

There is always a bigger fish.

This statement means that no matter how smart or intelligent you are, there is always someone who can be smarter and intimidating somewhere. Way to humble yourself, champ.

You were my brother Anakin, I loved you.

It is probably among the saddest quotes in the film and, fittingly enough, the best line in episode three, the Revenge of Sith.

You have probably been forced to screenshot or screen record pictures, videos, and quotes several times due to the lack of the download and save option. However, with the AhaSave downloader, you can save your Star Wars quotes in forms of videos from Twitter without much of a hassle.

The AhaSave Twitter Downloader is a small size application that has been specifically developed for Android users to download tweets, GIFs, memes, and videos on Twitter.  The most outstanding feature in this application is fast downloads which enable you to save your videos and tweets in no time. Additionally, you can arrange all your downloaded content in a private folder for easy referencing. What’s more, you can also download your favorite Star Wars quotes and videos with hashtags and captions altogether.

With AhaSave, you can have all of your Star Wars quotes in just a few short seconds, and it will be stored directly to the gallery of your device.

Disclaimer: Noteworthy, we are not officially associated or in any way endorsed by Star Wars.