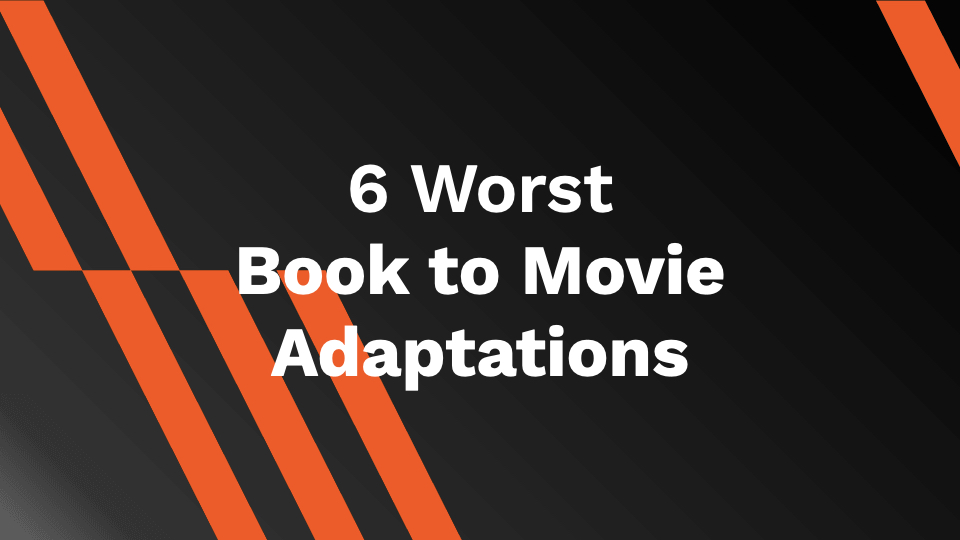 What’s some of the worst book to movie adaptations for you? A lot of times after watching a movie, we ponder that this story somewhat seems familiar or we might just have a couple of hours long DejaVu and this feeling is most common when you are an avid book reader, so to curb your curiosities, let me disclose that most of the movies are an adaptation of a previously written novel/book.

This transition is most of the time unsuccessful as a movie is not able to do justice to a story discussed inside the book.

So we have many numerous examples related to the worst book to movie transitions, amongst which the most prominent and well-known ones are.

The hardcore fans may beg to differ but as general public consensus goes, Twilight tops this list. A series of Human-vampire love story written by Stephanie Meyer, the critics found to be a poorly scripted mesh of cinematic, changed its genre from romance to comedy. Unfortunately, the rest of its sequels met the same fate, and book enthusiasts found the characters superficial and misleading.

The movie adapted from the book Cecelia Ahrens ‘Where Rainbow Ends’ trims down the detailed timeline and the story’s humour to clinging one-liners and cheap gags. Except for the chemistry amongst the main characters, the film is cringe-worthy in the league.

This is our next representative of worst book to movie adaptation. The life story of Rose Hathaway in St. Vladimir’s Academy is so blunt that it gives it a glassy look.

The vampire flick fails to incorporate any exclusive tropes, and the movie could use some extra effort to stand out from the rest of its league, which had been released during its timeline.

Dark Tower series is a fascinating series of horror/fantasy novel from the desk of Stephen king. This is undoubtedly a masterpiece well thought, planned and crafted.

However, the book to movie adaptation is unable to provide justice. The main problem is that the movie tried to captivate an elephant of a story into a single film, leaving the audience in blue.

The Girl on the Train by Paul Hawkins is a captivating psychological thriller starring a woman who tries to solve a mystery regarding a stranger couple who she sees on her daily commute on a train.

She told police what she had witnessed after someone from the couple goes, missing. Still, she has to investigate more since she isn’t adamant due to the lingering possibility of weak memory due to alcohol consumption. The book bags good reviews, but the movie became one of the worst books to movie adaptations when it was released in 2016, although the lead character’s performance played by actress Emily Blunt was praised.

Paper Towns is one of the best novels by John Green. The genre of the novel is about life and love in the high school years. After the success of The Fault in Our Stars movie adapted from the book, it makes sense to make more movie adaptations from Green’s other novels.

However, Paper Towns turns out the worst book to movie adaptation, and most of the fans agreed that Paper Towns missed the mark. The Paper Towns movie adapted from the book was unable to present the charm and magic of the book into the film.

AhaSave video downloaders is an app to browse and download video. This app is safe and accessible. This video downloader and private browser can auto-detect videos on the website, and you could download them with one click. It Supports all social media platforms and H.D. video download. We can guarantee your safety to the greatest extent. Browse and Download your favourite videos anytime and anywhere. AhaSave Video Downloaders are available in 4 major divisions: Facebook, Instagram, Twitter and All Video Downloaders, for you to download videos from all over the internet easily!